Fortunately, we can still benefit from his thinking and example as a great direct response marketer:

“Direct response was my first love and later it became my secret weapon…. When I started Ogilvy & Mather in New York, nobody had heard of us. But we were airborne within six months and grew at record speed. How did we achieve that? By using my secret weapon, direct mail.”

“Every four weeks I sent personalized mailings to our new business prospects. I was always amazed to discover how many of our clients had been attracted to Ogilvy & Mather by those mailings. That was how we grew.”

There’s a treasure trove of sparkling gems embedded in that story. Let’s reach in and grab a handful…

Note the word every in David Ogilvy’s story.

Direct response marketing requires an almost militant discipline… “Every” day, week, month… In the story he relates, it was every four weeks.

You’ve heard it said it takes 7 touches before people even become aware that you exist. Today, with the explosion of media barraging us from every corner, it probably takes more like 12 or more.

I’ve found this to be the case for every business I’ve grown. A simple weekly email to prospects and clients turns into a steady stream of new business. It fails like never… Sometimes it’s instant, sometimes it’s not. But it pretty much always works.

The key is having a consistent touch point for customers and prospects who come to expect good things from you.

Check out all the most successful marketers. There’s magic in giving relevant, useful, unique information up front.

The VSL (video sales letter) on the other side of this ad for instance, from uber-successful direct response financial information publisher, Stansberry Research:

I have it on good authority that the VSL behind this ad, which starts out by giving intriguing, relevant and useful information to its target audience has been very successful to date.

Being a “go-giver” from the get-go lets you first make a friend, then make a sale.

With direct response, branding can be an afterthought. If you even need it at all.

Take a look at another uber-successful sales letter, this one by Frank Kern: To paraphrase the old Wendy’s TV ad, “Where’s the branding?”

Other than Frank’s name, which you could argue is a recognized brand name among internet marketers, there just ain’t no branding.

And, from what I hear, Frank gets along just fine without any.

Which is a Godsend for the small business owner or marketer with limited funds to invest in advertising.

As the great David Ogilvy said, “You people who know direct response have it in your power to rescue the advertising business from its manifold lunacies. Today my first love is coming to its own. You face a golden future!”

How to Avoid Getting Stuck in “The Chasm”

Are your prospects doubtful and skeptical about how you can help them? Here's good news. 😊
http://bit.ly/3l1WVib

Over half of U.S. App Store spending now comes from non-game apps https://buff.ly/3voM5cx

Smart Strategies To Promote And Grow Your Small Business https://buff.ly/3nt3pbM 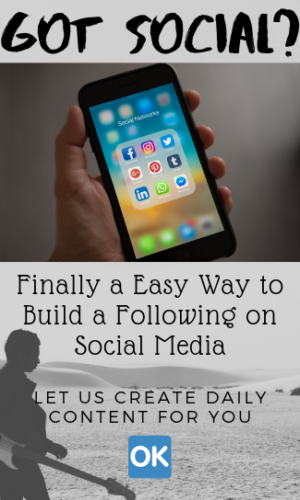